The investigation is in relation to an alleged conflict between the Fort McMurray chapters of the Warlocks and the Syndicate, a Hells Angels support club. Beginning in late August, there have been a number of criminal incidents believed to be linked to this conflict. Those incidents remain under active investigation.

All of the 16 firearms seized were lawfully possessed and there are no firearms charges being sought at this time. However, the firearms were seized in the interest of public safety and ALERT will be applying for their destruction.

Five members of the Warlocks were arrested and charged with committing an indictable offence for a criminal organization, robbery, and possession of a prohibited weapon:

The accused have been held in custody with their bail being denied. They are expected to return to Fort McMurray court on September 26.

The Warlocks have been operating in Fort McMurray since 2010 and are one of two chapters in Canada for the Florida-based club. Previously a Warlocks chapter operated out of Drayton Valley, but in March 2014 ALERT dismantled the club when four members were arrested.

Anyone with information concerning this investigation is encouraged to contact Fort McMurray’s dedicated gang tipline at 780-788-GANG.

ALERT was established and is funded by the Alberta Government and is a compilation of the province’s most sophisticated law enforcement resources committed to tackling serious and organized crime. Members of Alberta Sheriffs, Calgary Police Service, Edmonton Police Service, Lethbridge Police Service, Medicine Hat Police Service, and RCMP work in ALERT. 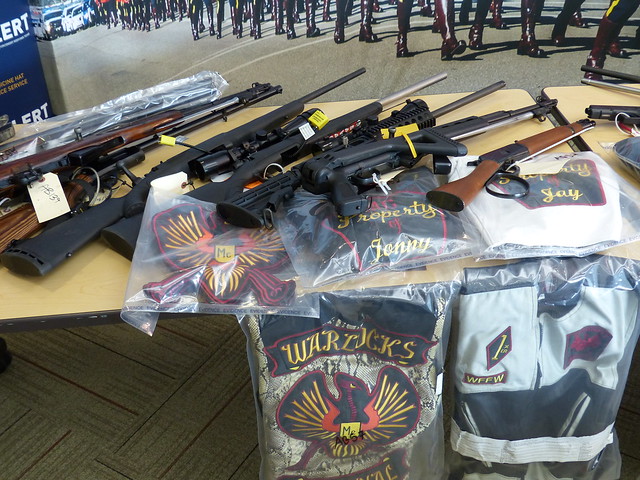