Edmonton… Two Edmonton residents have been charged in connection with a lengthy and complex fentanyl production investigation by ALERT.

Project Alchemy was a nine-month ALERT Edmonton fentanyl production investigation that concluded with arrests on July 6, 2016. The investigation dates back to October 2015 when Canada Border Services Agency officers at the Edmonton International Airport intercepted 100 kilograms of the fentanyl precursor NPP. The powder was contained in four barrels and originated in China. CBSA referred the seizure to ALERT who conducted a follow up investigation.

ALERT dedicated a significant amount of time, resources, and made this investigation its highest priority given the public safety ramifications. On December 9, 2015 search warrants were conducted at an Edmonton home, a Red Deer County business, and a suspected fentanyl lab in Leduc County.

Deputy Commissioner Marianne Ryan, Commanding Officer of the Alberta RCMP stated, “(As the Commanding Officer of the RCMP in Alberta), I want to emphasize our commitment to disrupting the criminal activity of those who would try to destroy our communities through the drug trade. Together with our law enforcement partners in ALERT and the CBSA, we will continue to focus on reducing social harms related to substance abuse.”

The following items were seized from the Leduc County rural residence:

The fentanyl pills seized in Leduc County were white and had similar markings to a Percocet pill. The pills were confirmed as fentanyl after initial lab analysis, but only recently did further testing reveal that the pills also contained W-18. ALERT issued a public notification concerning the W-18 powder seizure on April 20, 2016.

The search warrant at the southeast Edmonton home of the accused resulted in the seizure of chemicals used in the production of MDMA, firearms, and cash:

Dean Clayton Abbott, 41, and Shavon Carlene Wenger, 32, were arrested on July 6, 2016 and have been charged with numerous drug offences. Abbott and Wenger have been jointly charged with:

ALERT was established and is funded by the Alberta Government and is a compilation of the province’s most sophisticated law enforcement resources committed to tackling serious and organized crime. Members of Alberta Sheriffs, Calgary Police Service, Edmonton Police Service, Lethbridge Police Service, Medicine Hat Police Service, and RCMP work in ALERT. 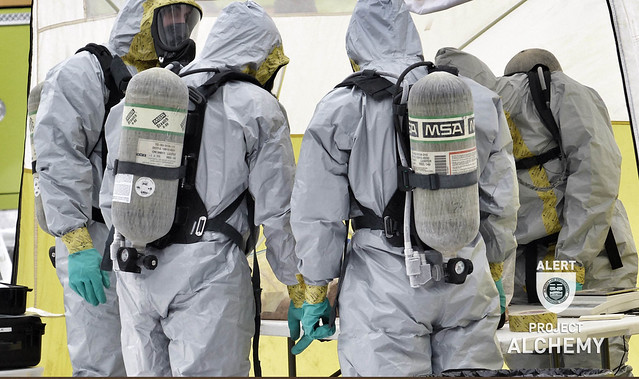