Edmonton… A lengthy investigation into the Edmonton chapter of the Hells Angels motorcycle club has resulted in 10 arrests, over $1 million in stolen property recovered, and 21 firearms seized.

ALERT Edmonton’s organized crime and gang team’s investigation found that members of the Hells Angels, support clubs, and associates were allegedly involved in theft, re-vinning, and trafficking of a variety of stolen trailers and recreational vehicles. Amongst the 10 suspects arrested are Hells Angels members Julien Roussel, 58, and Christopher Escott, 32.

The investigation, called Project Al-Wheels, dated back to October 2015 and was done in partnership with Edmonton Police Service and various RCMP units. A total of 15 search warrants were carried out in the communities of Edmonton, Grande Prairie, Alberta Beach, Gunn, Onoway, Morinville, Legal, Ryley, Sherwood Park, Red Deer, St. Albert, and Langley, B.C.

Thirteen of the search warrants were carried out simultaneously on May 12, while subsequent search warrants took place on May 19 and May 25. Project Al-Wheels resulted in over $1 million in stolen property recovered and numerous firearms seized.

ALERT believes that the vehicles were being stolen from area residences and businesses, and then fraudulently registered. Once registered, the vehicles would then be sold amongst Hells Angels members and associates at steep discounts. In some cases it is also believed insurance fraud was being committed. Project Al-Wheels identified a number of stolen vehicles and suspects using a variety of specialized techniques.

Ten people have been arrested and are facing in excess of 300 criminal charges relating to stolen property and firearms. None of the firearms seized were lawfully possessed.

Project Al-Wheels started thanks to a Crime Stoppers tip. Members of the public who suspect drug or gang activity in their community can call local police, or contact Crime Stoppers at 1-800-222-TIPS (8477). Crime Stoppers is always anonymous. 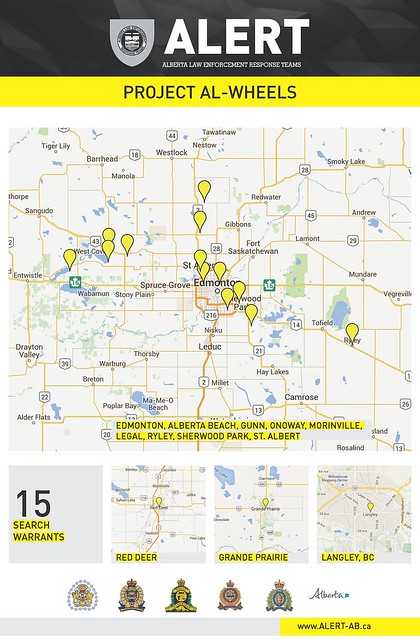